Letter of the day:

Dr Ali, love your work…thank you so much. I realize you probably get hundreds of emails, but I hope you can reply to me. Question: Met a great guy online — a gentleman, courteous, considerate. Except he obviously lied about his height by 5 or 6 inches. Is this a red flag? Thank you, Tracy

Many of them are trying to sell me walk-in tubs, which I hear are all the rage these days. There’s the occasional well-meaning gentleman from Nigeria who wants to deposit a few million dollars in my bank account out of the goodness of his heart, Canadian pharmacies that are very concerned about my love life, and a lot of ladies with Russian-sounding names who somehow know that I’m a cat person and want to show me their kitten – on a webcam, no less!

The crazy thing is, they’re all total stangers! And yet, so generous. The outpouring of love online is just amazing. And occasionally, in the midst of all the online love, is a letter about… love online! So meta.

Let’s see what’s going on here, Tracy. This sentence is the first thing that catches my eye:

Y’know, I bet that’s the same description the ladies gave to another handsome, suave, courteous guy they met for the first time. His name was Ted Bundy, and let’s just say things didn’t end nearly as well as they started.

I’m not here to tell you that all men you meet online are serial killers. I’m just saying that you have no idea what a guy is really like on a first meeting – especially if you just plucked him out of the ether through some online medium.

Now if this were a family friend or co-worker or classmate, you have some context to judge. You have acquaintances in common, and the chances of him being an axe murderer go down significantly.

The thing is this: being courteous, gentlemanly and considerate are merely necessary conditions, not sufficient ones. Every guy who wants to get into your pants and smart enough to know how things work is going to be courteous, gentlemanly and considerate to start. If he’s a buffoon on the first date, of course that eliminates him immediately. But not being a buffoon does not give you enough information to act on.

Then, there’s the whole lying about his height thing. That’s not as much about him as it is about the medium in which you met: an online dating site. I’ve written extended rants about this before, so I shall refer you to The Six Dangers of Online Dating for a recap.

Scientists have done studies on online self-reporting, and it turns out that nearly all men lie about their height by a few inches on their dating profiles. I totally understand. I’ve found that at 6’9”/2.06m, ladies often find my stature intimidating, so I just say I’m 5’10”/1.77m.

Of course, the flip side of that is women universally lowball their weight. And pretty much everyone, male, female or hermaphrodite, is lying about their age.

So what’s really happened here, Tracy, is that you’ve walked into a den of thieves, where the medium predisposes everyone to be dishonest. And if you’re the one person who’s totally up front about your stats, you’re like the one honest guy in the Tour de France who’s not doping. In cycling circles, this is technically known as a “suckaaaah.”

This brings us back to your question: is misrepresenting his height by half a foot a red flag? Now I know that none of you ladies who are reading this would do something of that nature – like, say, wearing shoes that would make you look taller, slim your legs and perk up your calves and butt. Or applying pigment around your eyes that would make them look bigger and more striking. Or putting dyed paraffin on your lips to make them look redder, wetter and makeout-ready. Or dye your hair to make yourself look younger, or more serious, or more fun. That would be misrepresentation, and you would never do such a thing!

Or maybe such a thing has become so common that it’s almost required, such that if you didn’t do all those things (and more), you’d imagine yourself at a stark disadvantage in the dating pool.

In case you’re now confused whose side I’m on, allow me to clarify: I’m on the side of long-term happiness and fulfillment, always. This requires knowing what you want, what you’re getting yourself into, and making sure they match up.

I could easily say, “Omigod, this guy’s a stone cold liar! Don’t you dare go out with him again.” Or I could put things in context so you can see what’s really going on. That way, you can make an informed decision about your long-term well-being such that you’re not endangering yourself, while at the same time not eliminating perfectly decent guys with lower centers of gravity.

The fact of the matter is, online dating for guys is super-frustrating – and I speak from experience. It’s safe to say that I rarely get blown off in person. It’s also safe to say that I regularly get blown off online. For the few months that I ran the online experiment, dozens of attentive, lovingly-crafted letters sent to women — ladies so well algorithm-matched as to be my long-lost twin — were consigned to the outer rings of Saturn along with all of my lost socks and Lego pieces.

Now if a guy is 5’7” (170cm) or shorter, it’s hard for him to even get an algorithmic match, since most ladies (80%) set their filters for guys who are 6 feet — or at the very least significantly taller than themselves. This means that the likes of Napoleon, Mayor Bloomberg, Tom Cruise and Jon Stewart wouldn’t even get to your virtual front door.

So when a guy fudges his height on his profile, the act does not carry a lot of meaning. In fact, it’s meaningful if he doesn’t fudge his height, since that’s the rarer phenomenon.

Therefore what you need to do is to evaluate situations on a case-by-case basis. Is he courteous and trustworthy? Do I enjoy his company? Is it fun? Also, what do I want out of it? If you’re looking for an RLD (relationship of limited duration), then either you care a lot about his height since you want a hulking studmuffin of manly biomass to give you some good lovin’, or you just don’t care at all as long as other body parts are functional.

Now I know that a lot of you ladies are into tall boys. It seems to me that tallness in guys is a lot like large breasts in women. Basically, it dazzles people such that most of their reasoning brain shuts down, and they just follow you around in a height- or cleavage-addled funk. Or so I’ve heard.

Well, I’m here to remind you that fulfillment is not a person; it’s a feeling. And there is no correlation between how tall a guy is and how fulfilling a relationship between the two of you is going to be. No correlation. None. Zip. Nada. Zilch. Zero.

Tall is a proxy for status and ability to protect. It’s also an honest signal of good genes and health. And yes, it’s such a primal thing that tall guys do make more money than shorter men. But in this day and age, you don’t need anyone to protect you from saber-toothed cats or the neighboring cannibal tribe going on a panty raid. And you make your own money, so you don’t need his, thank you very much.

But primal, visceral and unconscious it is, and tall guys are used to having women give them more attention. So guess what – if you’re going after him, so are 100 other women. And they’re going to keep on going after him, even if he ends up being your boyfriend. Especially if he ends up being your boyfriend, since he’s now even more desirable ’cause he’s unavailable and therefore more scarce and therefore more valuable, as the twisted logic of these things goes.

This brings us to what I call Clooney’s Curse, which goes something like this: She who nabs the stud does not get to live happily ever after. Why? Because if you are smart enough, savvy enough and sexy enough to be the one woman out of 50 million who George Clooney proposes to, there are still 49,999,999 women out there who want him. And it’s possible a few of them will be jealous enough and motivated enough to sabotage your bliss. 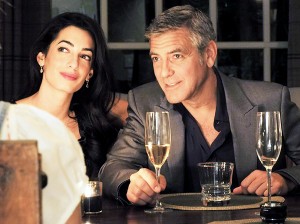 You may think, “But hey, how about Brad Pitt? He and Angelina Jolie seems to be doing pretty well.” Except that Mr Pitt was initially married to the perfectly lovely Jennifer Aniston when Ms Angelina J. Voight came along and lured away her husband.

Clooney’s Curse is another form of the winner’s curse, familiar to students of economics: the person who “wins” an auction is the person who was willing to pay more than anyone else. That’s another word for overpaying — not exactly my definition of a bargain.

So do not begrudge the smart, educated, vivacious and lovely Ms Amal Alamuddin her betrothal to Mr Clooney. Because, as I explain in Chapter 5, page 110 of The Tao of Dating for Women, a Great Man gives you the same headaches as a Bad Boy. And knowing that legions of women worldwide are willing to throw themselves at your husband may give you an ego boost for a while. But, like a fancy Rolex worn in a rough neighborhood, it’s also likely to become a liability. If Clooney’s your husband, the whole world is your rough neighborhood.

Being married to someone rich, famous and desirable is bound to be an adventure. Just remember that an adventure is not always compatible with peace of mind. So it’s good to remember that fulfillment is a feeling, not a person. The person whose company is fun and brings out the best in you may not always match your mental checklist. So given a choice between real, long-term fulfillment and the checklist, stick with fulfillment. If you always go for the food instead of the menu, you’re much more likely to be well-fed in the long run.

11 Comments on “Clooney’s Curse, Online Lying & the Dilemma of the Great Man”

Add some widgets to this area!