Well, apparently the ‘Are men intimidated by you?’ article hit a nerve.

What are some examples of being vulnerable? Thanks Dr Ali! – Kelly

This is one of the best blog posts! Great insights & advice!! A follow up question- what does vulnerability look like to a man? Especially if women are working so hard to not appear too needy, emotionally available & scare the guy off from the other end of the spectrum? Thx, HK

And yet another one:

Hi Dr Ali,
Another great article… so wise you are… and witty as usual!  I have a question: When you refer to a women being vulnerable, and a man being attractive to that quality best of all, are you referring to a woman, ‘leading with love’ as you stated?  In other words, what vulnerable qualities are you talking about that men most like? Just wondering.  Thanks – Betty K.

So. What does it mean to be vulnerable?

One of the things I like about Eastern art and philosophy is its emphasis on the concept of negative space.

If you look at a Japanese woodcut or a Chinese brush drawing, you may notice that is has a lot of nothing in it.  You’d never see that in a Western painting – the entire canvas is covered in paint.

But a brush drawing or Zen rock garden is perfectly happy having a lot of empty space.  And it is the interplay between the space and the ‘stuff’ that creates the art – the void of yang and the fullness of yin. 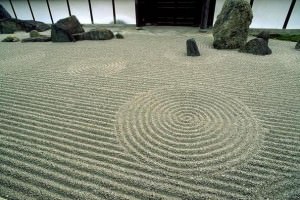 And so, to grasp a concept like vulnerability, it may be instructive to look at its complement – namely, invulnerability.

One version of invulnerability is perfection.  Not only is it an unattainable ideal, but it’s actually rather off-putting.  There’s something cold and inhuman about perfection.  Someone who is perfect is easy to admire but hard to love.

Another version of invulnerability is total self-sufficiency.  “I can totally take care of myself.”  This is yet another flavor of off-putting – especially to a guy.  Guys want to take care of you.  They want to do stuff for you.  They want to please you.  If you have everything and need nothing, that doesn’t leave them with anything to do.

Why do you think the image of the damsel in distress is so iconic?  Because it makes the man feel useful.  Hero for a day – that’s all they want to be.  No vulnerability, no hero.

And finally, another version of invulnerability is being impervious to harm: “My armor’s so thick, nothing can hurt me!”  Except that the armor that blocks the bad stuff also keeps out good stuff like love, affection and intimacy.  And it’s just hard (and a little scratchy) to hug someone wearing chain mail.

Vulnerability, then, is the opposite of these things.  It means being receptive to help.  It means allowing the man to act as your protector, even though our urban centers have few mountain lions to fend off.  It means giving up the need to appear completely self-sufficient and perfect, because nobody is completely self-sufficient and perfect and it’s all a big scam anyway.  We all live deeply interdependent lives in an ecosystem we sometimes forget to acknowledge.

But instead of listening to me, why don’t you read this letter from a reader.  It will explain the concept a thousand times better than I ever could.  Take it away, Melanie:

“From a man to you, here’s a secret: there’s almost nothing more attractive to a man than a woman’s vulnerability.”

Those were the words I did not have the ability to grasp for many years.  I lived more than a decade pretending that I was “normal”.

I bought your book almost two years ago.  I wanted to know how to avoid the mistakes I made before.  I spent 12 years with a man that couldn’t decide to marry me.  I knew our problems weren’t all his fault and wanted a chance to start out right should I meet someone.  I thought I was at a disadvantage for finding love.  After reading your book, I realized I actually did many things that were goddess-like, but I should have more confidence.  I also needed to understand what a good guy looked like.  The worry about dating disappeared as I read your book.

My vulnerability is a bit different than that of most women.  I’m 32 and I’ve had rheumatoid arthritis since the age of 20.  I’m well educated, have a diverse set of interests, attractive, unable to have children because of my RA medicines and felt that the chances were not in my favor for finding someone that would care about me as more than a friend.  In my life, I have been blessed with friends that are fiercely loyal.  However, I also struggled with the idea of allowing someone to love me.  They might eventually have to live a life where they could be asked to help someone that struggles to button a shirt or possibly more.  It would be the most challenging of any loves.

I met a man nine months ago, introduced by a mutual friend.  Within our first few meetings, I offered up the good and bad of my life.  I would not pretend that I was perfect.  I had nothing to hide.  I could not live through someone else trying to change me.  There were no sparks, but rather pleasant company.  I only knew I enjoyed my time with him.

He’s 30 and prior to me, he had never dated anyone for longer than six weeks.  We’ve been dating seven months now.  He doesn’t love me in spite of my RA; it is one of the things he loves about me.  He gets a strong, independent woman that is guaranteed to ask for help.

When we hiked our first fourteener, my fingers were too swollen to tie my boot laces tightly.  He would kneel at my feet to tie my shoes properly so I could continue on with him.  My body is essentially waging war on itself and I tire easily.  I can look at him and say “I’m getting tired.”  Never does he complain that I ended his fun or keep him from anything.  He says I help him enjoy life instead of rushing through it and that I bring him balance. He loves that he can also be himself in my company.

In the past, I have fought against needing anyone, of being weak.  I let go of this.  I am now open about my flaws and met a man that helps me live life as I imagined it instead of living within my own limitations.  I was overcome with emotion when I hiked my first slot canyon with him.  A girl with RA was able to climb 10 and 12 ft rock facings because this man was patient enough to talk me through a climb or offer a boost or some stability when I needed it.

You speak the truth.  Vulnerability, knowing that you are needed, receiving gratitude for what you give to fill that need – that is the stuff that feeds love.  As for this love, it is not all consuming.  I just leaves me breathless to live in it and see him grin ear to ear when he helps me with something as simple as tying a shoe.

Thank you for encouraging the pursuit of balance and not hiding from our own flaws.  I recommend your book more than any other.  I found such peace in your words and share them with many of my girl friends. – Melanie W.”

So allow yourself to be vulnerable.  Note that when you become maximally vulnerable, you paradoxically become invulnerable.  Everything just passes through you when there’s nothing to hold on to.  It’s the guarding and holding that actually cause the pain, not the vulnerability.  You can shoot at a pool of water, but the water just re-forms around the bullet, allowing it to pass through without resistance.

So go ahead and be your perfectly imperfect, quirky self.  It’s the only version of you that people can love.

10 Comments on “What does it mean to be vulnerable?”